On a recent trip to Thailand, BackpackMister and I were intent upon taking the so-called slow boat down the Mekong River to Laos. We’d been staying in beautiful, sleepy Chiang Mai, one of my favorite cities of the world. Our innkeepers at CS House helped us book a trip that included everything – a night’s lodging along the way, meals and transportation. The price was reasonable for a three-day adventure: 3,200 Thai baht, or about 90 U.S. dollars. Our trip also included a free add-on: a stop at the White Temple.

So we said goodbye to our beautiful inn, and started the journey. A white van picked us up, and stopped at several other hotels to pick up our fellow travelers.

Now, if you’ve never been in a transport van in a developing nation, there’s something you should know. In my experience, it is not a ride for the faint of heart. Had I known how terrifying this particular ride was going to be, I would have had a drink beforehand. I popped anti motion-sickness meds instead.

As we left Chiang Mai we soon began to climb into the hills of Thailand, where we started careening around hairpin turns and passing other drivers. It was the kind of ride where you have to grip on to the seat in front of you or risk falling off yours. Our van driver actually seemed angry – he would yell at the other drivers and gun it around the corners, seemingly out of spite. He had no fear, and would even play chicken with oncoming cars in the opposite lane. We climbed and climbed, and although I am known for being an anxious person, even BackpackMister said he was stunned and nervous. One rider, a lovely, blonde backpacker, laughed blissfully as we sped through the mountains, with not an inkling of fear. She was so perfect. So young. So fearless. I wished I could be her.

After nearly three hours of this terrifying ride, we pulled in to a parking lot near the White Temple. “Twenty minutes!” Barked our driver. Judging from the long lines at the restroom, and the fact that it was lunch time and we wouldn’t have any additional stops during the day, I knew we didn’t have time to both tour the temple and meet our earthly needs. I opted for the toilet and snapped a few shots of the stunning temple. 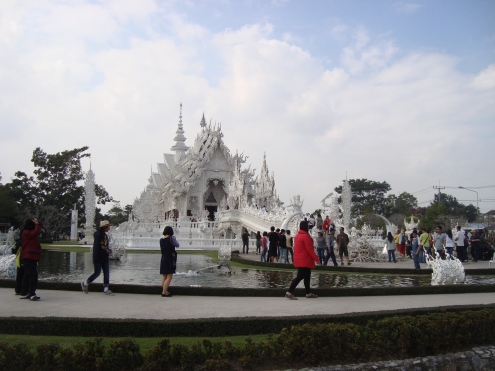 We went back to the van, so as not to miss our ride. To BackpackMister I said, “Are we really getting back on this thing?” He shrugged. We were stuck.

We purchased a few tiny steamed dumplings from a shop near our van, then piled back in and held on for the ride. But not before I was able to snap some pics of our driver. I think he was on to me.

Hours later, we pulled into the border town of Chiang Kong, where we were to spend the night; our lodging had been pre-arranged at the Pak Ban Phoen Hotel. But before we got to our hotel, our van mysteriously stopped on the side of a road, and another van pulled up behind us.

“You get out, go to other van.” Said our driver as he pointed to several of us.

BackpackMister looked at me warily. “Let’s not get separated from our stuff.” We tried to keep an eye on whether our bags would make it into the van. The other van pulled away with our stuff inside.

This is Thailand. After a while, you learn to roll with it. And you learn to carry everything that matters on your person.

Shortly thereafter, we pulled into Pak Ban Phoen Hotel’s parking lot and looked about in stunned silence. The hotel was a cinderblock u-shaped building, sloppily/partially painted to make it look slightly less severe. Doors to the rooms were padlocked.

Our luggage was dumped unceremoniously in a pile in the dirt parking lot. Near it was a sign that read: “6 a.m. Get Up! 7 a.m. Breakfast! 8 a.m. Leave!”

BackpackMister is much more resilient than I am, but after a stressful day in the white van of death with no real food or toilet breaks, I think it’s safe to say we were both at the traveler’s breaking point.

We unlocked the padlock to our room. We were immediately hit with a wave of eau de mothballs, which had been placed in an aluminum pie pan beneath a pipe in the bathroom, presumably to keep the roaches out. The toilet was metal, and had no seat. No biggie, we’ve experienced that in developing nations before. The beds, two singles side by side, were covered in threadbare quilts and were so hard I could knock on the mattress. A wooden bench was the only other furniture in the room.

“Let’s get out of here,” replied the Mister.

We grabbed our essentials and left our luggage, thinking maybe we’d find another place to stay for the night so we wouldn’t have to experience the misery of this hotel. We’d seen a sign for a British Pub called The Hub Pub near the entrance to the hotel, though, and the thought of a cool pint after a long day of hard travel was enticing. So we strolled through Chiang Kong, which was actually a very cute little town. We took a lush alleyway, which wound through woods and near some simple, ramshackle homes.

When we came across The Hub Pub, we felt like we’d found the promised land.

It was a bit too quiet. No music. No customers.

Then a man hopped out to the door on one leg and bid us “Welcome!”

Tune in to Part II to find out what happened next.

Charish Badzinski is an explorer, food-lover and award-winning travel and food writer. When she isn’t working to build her blog: Rollerbag Goddess Rolls the World, she applies her worldview to her small business, providing strategic communications, media relations and writing support to individuals and organizations.

6 thoughts on “That Time We Stayed in a Thai Border Town Prison: Part 1”