Apparently Vienna installed water stations as an answer to noticeable effects of global warming via their increasingly hotter summers. I filled my water at a water station, thankful for the foresight of those who bankrolled them. I was in Heldenplatz, or Heroe’s Square. Drank my water and refilled. It was hot.

I continued to another courtyard between the Kunsthistoriches and Natural History Museums, and a statue of Maria Theresa, their greatest Empress. I continued to wander, though the Rick Steves audio tour had concluded. And I located the Parliament. Wow. everywhere you look here it is breathtaking. I must have taken 200 photos.

My feet were killing me and I was getting hungry as it was near dinner time. I hopped the subway and rode back to the Airbnb flat. Made myself two sausages and tomatoes, and ate some seed bread. They do bread really well here. I hopped in the shower, then walked a different direction from the apartment to see what I could see.

Found an Aldi and went in for groceries. I was taking my time, selecting bread, when workers who were cleaning the floor started talking to me – using a key turn motion. Oh! They were closing! Quickly I selected a wine and went to the checkout. I apologized to the English-speaking cashier who acknowledged that stores close early in Austria: 8 p.m., 6 p.m. on weekends. I my haste, I mis-loaded my cloth grocery bag and a jar of jam went tumbling, crashing on the floor.

The previous day I had pushed the wrong button for the “lift” or elevator at my Airbnb, and it turned out to be someone’s doorbell! I’d immediately bolted up the stairs to avoid prosecution.

Sometimes I think I bumble my way around the world. And you know what? That’s okay.

Embarrassed, I took the newly-offered jam jar. That cashier was so kind. And I strolled home.

I drank a glass of wine and waited for my host, Balazs. I was in desperate need of clean laundry, but didn’t know how to run his machine and couldn’t understand the settings. He’d planned to be out with friends, but said he received Airbnb messages direct to his phone. I asked permission to give the machine a try-via text-he sent instructions, but I got them too late and had already tried to set it on my own with help from Google Translate. Seriously, if you travel and don’t have this app, you are missing out. There’s even a function where you can translate in real time, or take a photo of words and it will translate for you! Amazing. You need wifi for both, but seriously the technology is astounding.

Plan to do laundry as you travel. This enables you to pack for a week, but travel indefinitely. Here I am doing wash in Vienna. Photo by Charish Badzinski.

Apparently I got the washing machine running, but it needed adjustment. When Balazs returned he adjusted it, as I had used the slower/longer setting during which a load of laundry takes 2.5 hours to complete.

I had a nice, long chat with Balazs about his upcoming trip to New York and Chicago, and his impressions of Americans. He is so interested to talk with. At long last he yawned, and I took notice–it was midnight. The night had flown by.

I read my Rick Steves guide book and went to bed, and slept hard.

Knowing I have a meeting today I’ve decided to take it easy. I made breakfast: bread and jam and leftover coffee from Balazs. I skyped briefly with BackpackMr and RollerbagMom and my brother popped in, he was at Mom’s place. It was so nice to see him.

I spent the morning catching up on journaling and work, and doing a little personal business. It is 9 days into my travel and it is time for a relatively down day.

I strolled around this Vienna neighborhood and found dirndls for a song in a secondhand store.

If I could get them to La Crosse, Wisconsin I’d have the possibility of turning a huge profit with the Oktoberfest crowd! I went to the city center near the big church, St. Stephens. 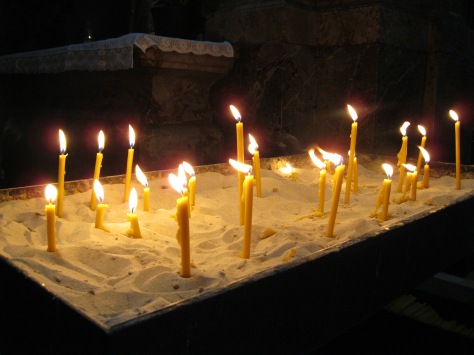 It was so nice. I just people watched and sipped a beer. A cafe was right across the street, where people were having wine and pizza.

A lone female traveler was seated nearby, she had some tea. I thought about chatting with her but honestly worried she might prefer to be alone to savor the moment. That is how we loners are. 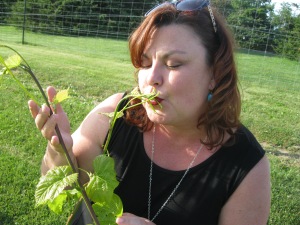